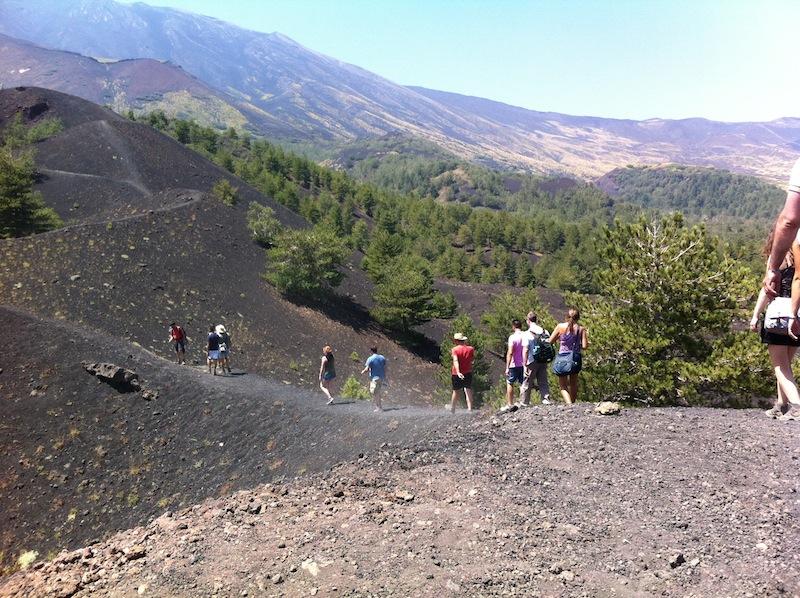 If I close my eyes I can still see the scene from the evening before I wandered to Mount Etna.

I am in the marvelous Villa of Taormina. It’s evening. The city lights reflect in the gulf, as in a timeless vision. The moon is bright, almost full, and lightens the sea. Far ahead, tomorrow’s destination hints to us, calls us, attracts us.

The Etna volcano and its wide sciara (‘lava flow’). It looks like a nocturnal painting, such a spectacular work of nature. A red lava flow of vivid fire stands in front of us and crowns a dreamlike scene. The next day we would have left to discover this marvel and there couldn’t have been a better way to prepare ourselves for such journey. Summer 2014 has been quite a particular season for the Sicilian volcano. On August 9 started a series of strombolian explosions followed by eruptions of cinder and lava flows from an opening on the New South-East Crater. We have been very lucky to end up here just during Etna’s most active time.

On August 13 we wake up early in the morning to leave for our trek. We are part of a guided tour and our compass and knowledgeable source is Tony, a freelance naturalist guide from Etnapeople, an association aimed to promoting the Etna volcano and its land. We leave on our vehicles from Taormina. Before actually starting the trek we reach about 2000 metres above the sea level on Etna’s slopes. Once we start walking on the black consolidated lava we start hearing the volcano’s rumblings every ten minutes. In front of us an unreal moonlike vision.

Despite the altitude, the blazing sun and the hot dust coming from the volcano are causing us to gasp. But it’s just one more step for being part of this incredible, beautiful picture. One of the many sides of a wonderful land, Sicily.

We keep going up and down, among extinguished craters and ‘lava bombs’ –large unexploded boulders filled with lava. We explore wild forests and black dust deserts. It feels strange to experience by hand how fertile the volcano’s land, so rich of minerals, actually is. We reach the highest peak of our trek, on the north-east rift, where we enjoy a stunning view. We also keep hearing the Etna, and watch it puffing and obstructing the sky with its intensity. The wind is strong, but it is still very hot.

Mount Etna is Europe’s largest active volcano and one of the world’s most active. So why are we walking around here instead of running for our lives? That’s because – as Tony tells us – it’s also a lazy one, a slow one.

Etna’s eruptions never killed anyone in its history. But you have to be careful: you can’t get near the central crater at less then three kilometres. So we keep a safe distance, and enjoy the view. Before ending our trek, Tony gifts us with another unforgettable experience. Geared with helmet and headlight we enter a lava flow cave. It’s dark and cool. We can finally say it: we entered Etna’s belly.

We stomped on its cinder, we touched the plants it grows, we smelled its dust and heard its rumblings. Etna charmed us like only a great natural wonder can do. And Sicily, land of wonders, never fails to amaze us. 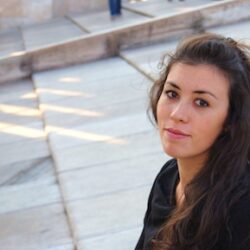 Journalist, law student, travel writer and passionate about photography. Travelling to me means discovery, questioning and inspiration. And writing is my life essence.