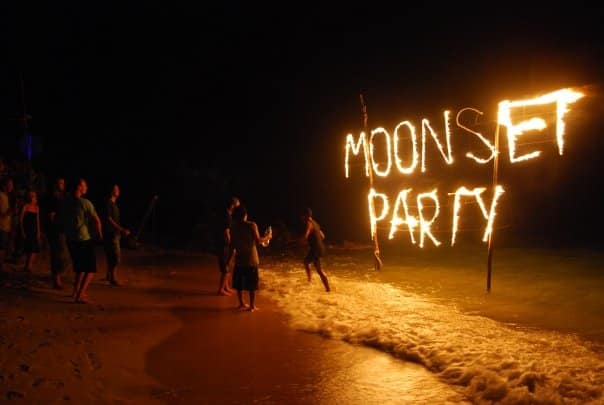 First time I travelled to Thailand I just wanted to take a break from India. After six months I had to renew my visa and I wanted a little holiday to act as any other stupid tourist. No art, culture or personal growth, just beaches, parties, food and drinks.

After an intense week in Bangkok I took a bus to Surat Thani, on the Gulf of Thailand, and a large speedboat took me to Koh Samui. Nice place, nice bungalows on the beach, but I wasn’t arrived yet. After a few days another boat took me to Koh Phangan, where every month the Full Moon Party is hosted.

If on Koh Samui everything was at hand and I could easily walk from one place to another, in Koh Phangan I had to cover most of times long distances. So I rented a scooter, the most popular mean to roam the island. But not always the safest: holes in the streets and alcohol proved to be a dangerous combination and I noticed more than once bruises and scars on the tainted bodies of other visitors.

My bungalow was in Baan Kai, a nice and quite beach, and I enjoyed moving freely on my scooter from one party to another, from the food market to the priceless 7/11s, open without interruption and source of drinks and food when everything else was shut or just too far. I loved the Sunset Bar on the hilltop and befriended with Mey, the gorgeous owner of the Serenity Bar on the main road. Her brother shared his time between stripping the foreigners of their money on the pool table and fighting in the muay thai arena.

The day of the Full Moon Party in Ban Tai I joined the event with my new friends, a colourful mix of Thai and French people. The party is on a few kilometres of beach and gathers several thousands of people every month. A must see, for once, but after I had my share of crowds and confusions I started to appreciate the little parties in the forest, or the small techno gatherings in small beaches, where no more than 50 or 60 people would assemble at once, allowing for more intimacy and a better chance to enjoy the wonderful scenarios around us. I collected countless lonely sunsets and crowded dawns, had dinners with fresh sea food and happy hours with Singha beer. I thought I would come to conquer the island, instead it was Koh Phangan which was conquering me.

One day I went on my scooter looking for breakfast and entered a 7/11. I couldn’t miss a guy with a lost look on his face in front of a fridge full of ice-creams. I couldn’t tell if he was trying to figure out the items in the fridge or his own reflection on the glass-door. I spent the rest of the day with my friends, drinking and dancing on the beach. On my way back I stopped at the same 7/11 for drinks and cigarettes. The guy was still there. I bought him an ice-cream and had him sit on a bench outside.

I wanted to thank him. Somehow, he made me understand it was time to go, before ending up standing in front of a fridge myself.