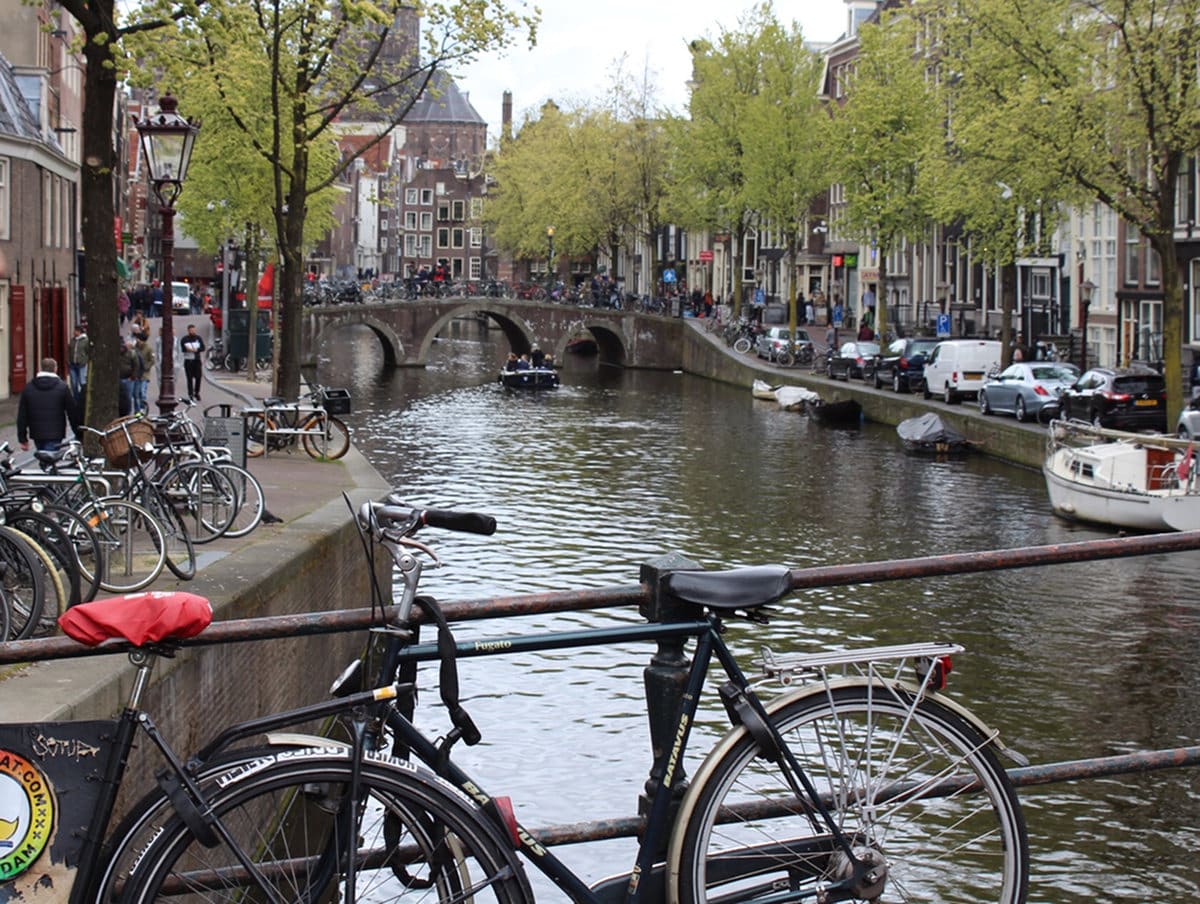 People go to Amsterdam for many different reasons, and food is not one of them. I was a bit worried before leaving for the Netherlands because most travel guides I had read listed among the best restaurants in town those inspired by French cuisine.

After touching down I cannot help noticing the concentration of tourist traps: international fast food outlets serving meals that taste the same in every country, and all you can eat restaurants with miserable photos of even more miserable dishes hanging from their windows.

I want to eat where the Dutchmen and Dutchwomen eat, not where the unadventurous, timid travelers buy their anonymous meals. As in other cities, in Amsterdam you have to keep your eyes open if you want to find what you’re looking for. 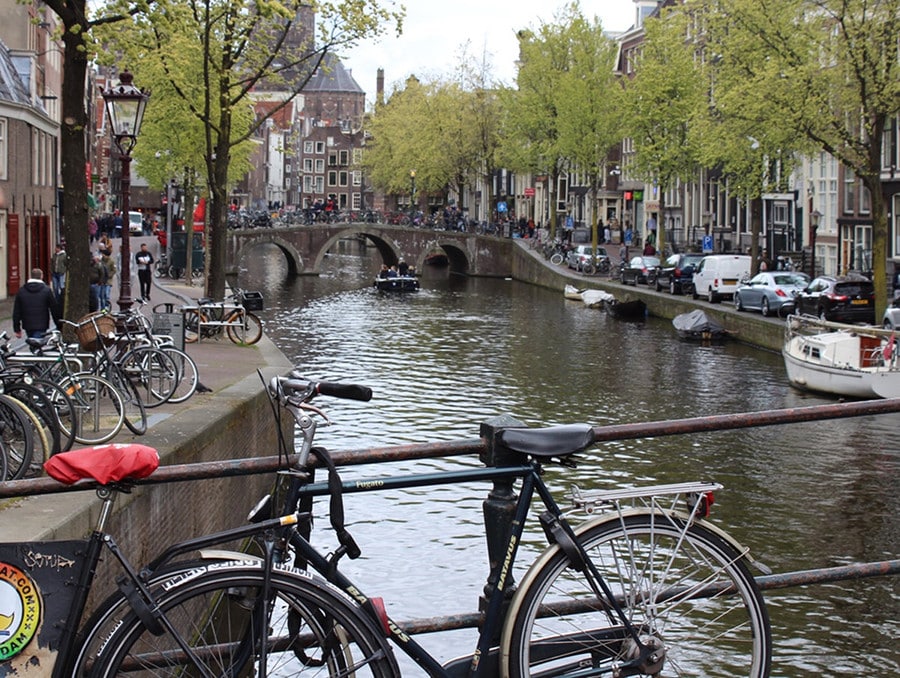 In most hotels around town, breakfast is included in the room rate, but I need a mid-morning coffee break. It’s not necessary to leave the canal area for a good coffee cup. In the very heart of the red light district you’ll find, funnily enough, the oldest church in the city.

From here you walk towards the canal, leaving the Oude Kerk façade behind, and go inside what looks like a back door to the church itself. You cross a small courtyard and then you enter an even smaller café, and you might think that this is the refectory of the church.

De Koffieschenkerij is indeed located in the Oude Kerk building, but the tiny café looks like a countryside tearoom, with its wooden window shutters painted in red and the door hidden by the vine climbing up to the church first floor windows. 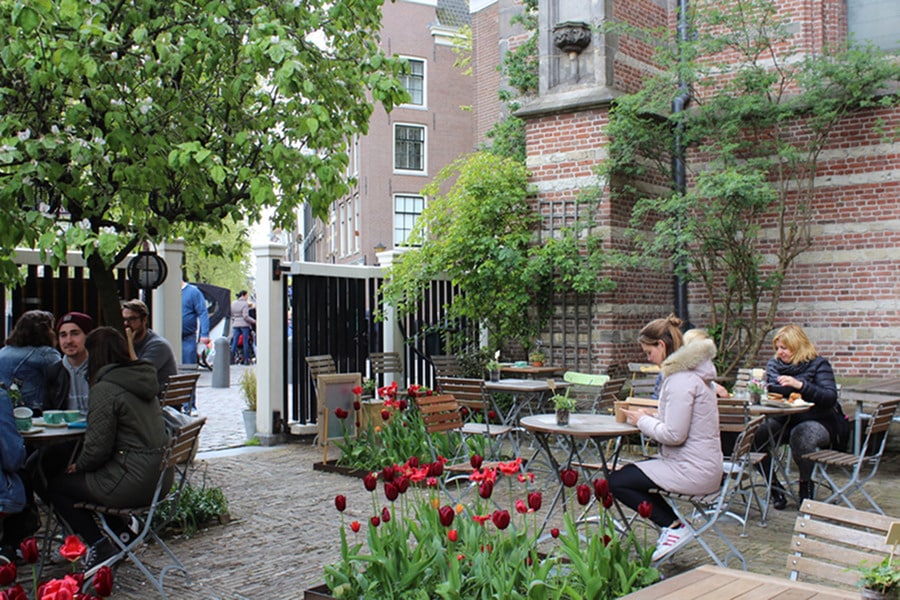 I am not sure whether the café is actually a part of the Oude Kerk building – maybe it just happens to be within the church premises. In any case, it’s the perfect place for those with a sweet tooth: the cookies, brioches, pains au chocolat, cakes and pies on the counter beg you to eat them. You can order coffee and cappuccino to take away or to drink in the garden, taking a rest from the people coming and going along the canal, beyond the wall.

We go south of the canals, towards De Pijp, a former working-class area. Bedsits were built in this neighbourhood in order to give housing to the immigrants from Spain, Portugal, Morocco and Turkey to work their shifts at Heineken, just round the corner from Albert Cuypstraat.

The street stretching from the Amstel river to the beer factory was a border area at the beginning of 1900, what with the workers living next door with students, prostitutes and clerks. They left their houses early in the morning and needed to buy groceries – fruits, vegetables, bread and fish that they would eat when they’d be back from their jobs. That’s when the first peddlers started to gather with their wheelbarrows full of goods, thus laying the foundations for what would soon become on of the most important markets of the city.

Today, Albert Cuypmarkt still looks like a countryside farmers market where you can buy almost anything, from clothes to pottery, from bread to fish. 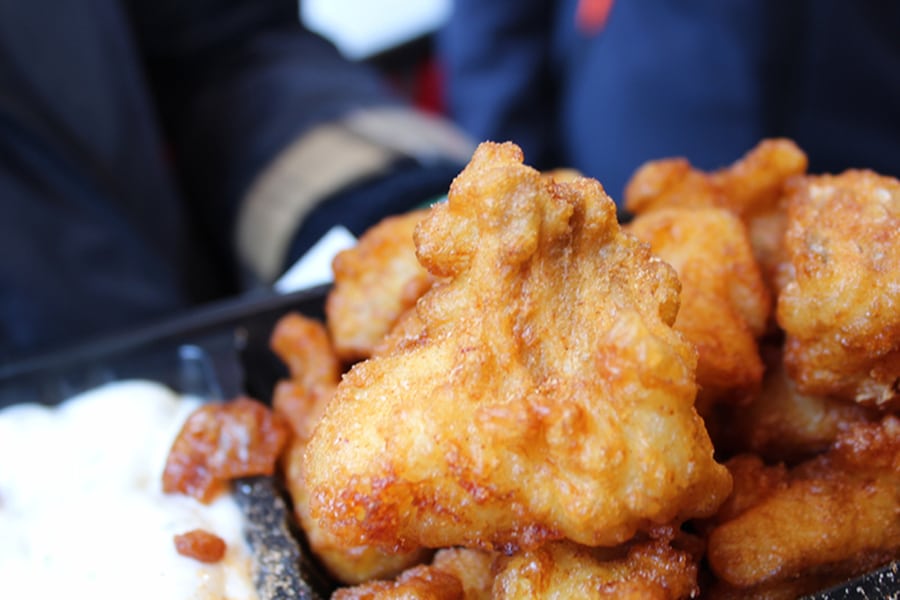 This is the place to go to sample some good Dutch street food. There aren’t many tourists waiting to be served at the fishmonger’s: just a couple of young women riding their bikes with their children in the wicker basket sandwiched between the front wheel and the handlebars, and some older ladies dragging their shopping carts full of groceries. The fishmonger doesn’t speak much English and can’t be bothered, so we don’t dare ask too many questions. We order kibbeling, small chucks of fresh fish – probably mackerel, battered and deep-fried. It melts down at the first bite, and it’s still hot.

The next stall sells broodje haring, marinated herrings served with brown bread, onions and pickles. I am not a raw fish lover, but this tastes different from what one would expect: the herrings are salty, with a creamy texture, and are perfect with the sour taste of the pickles. 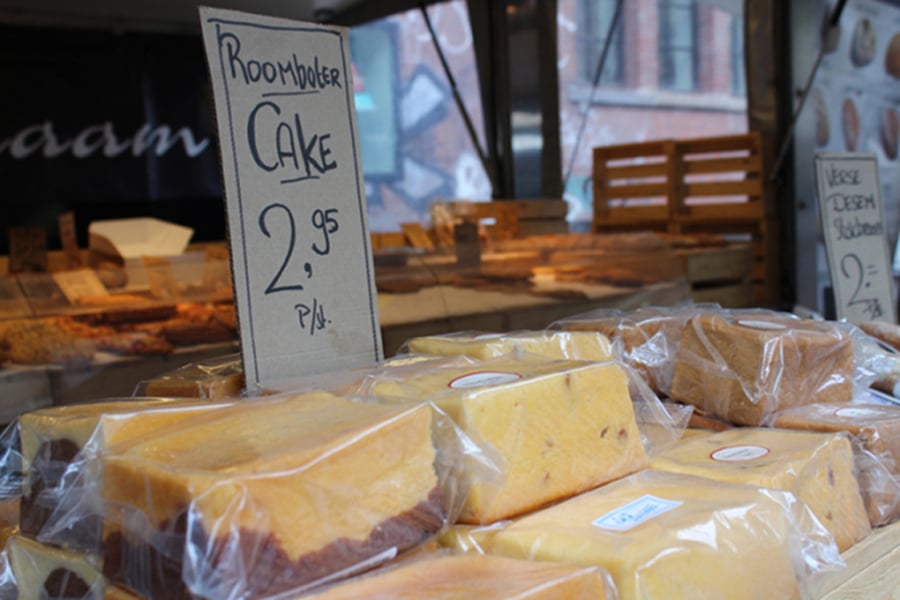 One last stop for a sweet treat: there are many stalls selling bread, where you can buy stroopwafel, a kind of waffle made by two thin layers of wafer filled with caramel syrup. There’s also a man who makes roomboter cake, which looks like a plum cake, but with much more butter. After the stroopwafel and a slice of roomboter, a mug of hot coffee is what you need to balance the sweetness.

We avoid the canal belt for dinner, moving westwards to another neighbourhood with a working-class past.

Legend has it that the name itself of the Jordaan area comes from the river Jordan: according to this theory, the first inhabitants of this part of town were Palestinians who brought along their culinary traditions. Legends and romantic theories apart, now Jordaan has undergone a process of gentrification and, as a result, is one of the trendiest areas in town.

A bit like Notting Hill in London, now it is crammed with galleries, independent shops and specialty coffee bars. Yet fashion is not what drags me here: I am more interested in a corner off then beaten track of Prinsengracht. If I had doubts about the origin of the neighborhood name, as soon as I walk into al D&A Hummus Bistro I resolve to believe that the area might, after all, have a Middle-Eastern past. 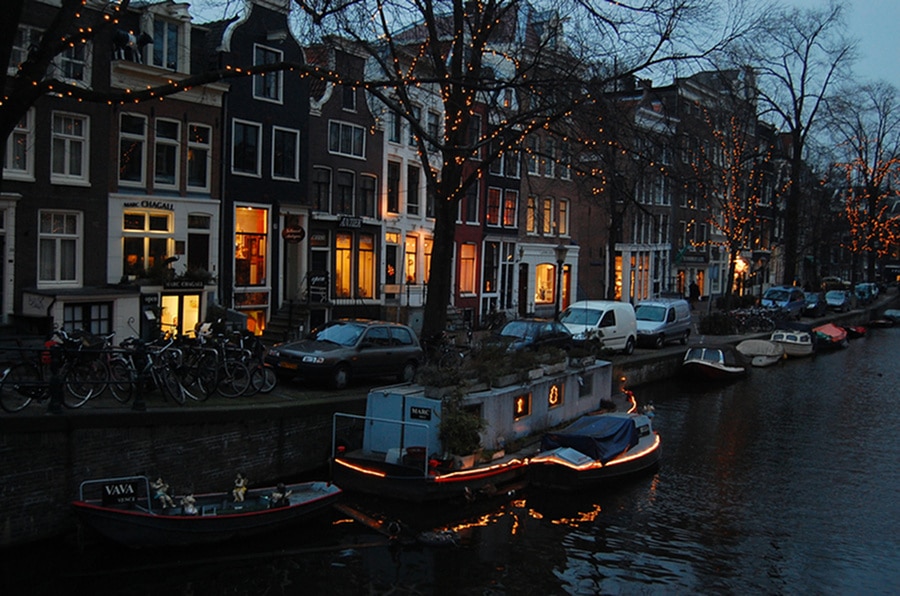 The place looks a bit messy and is quite small and dark. Each table is different from the next, and the walls are part whitewashed, part wood-paneled and part red bricks, as if the decorators couldn’t make up their minds. Light bulbs hang from the ceiling without lampshades and do not shed much light.

It’s not easy to read in the semi-darkness, also because the menu is handwritten on a portion of wall next to the open kitchen. You don’t order individually, so we end up eating most of what’s on the menu: plain hummus and hummus with tahini, falafels, babaganoush, pita bread, lamb and veal kababonim, couscous.

We are given cutlery and dishes but we help ourselves from the plates at the center of the table, eating a little bit of this and a little bit of that. We sip our mint teas and try something more from the menu. At the end of the dinner we only wish we could start all over again.

2 thoughts on “Where to Eat in Amsterdam: Mini Guide and Tips”