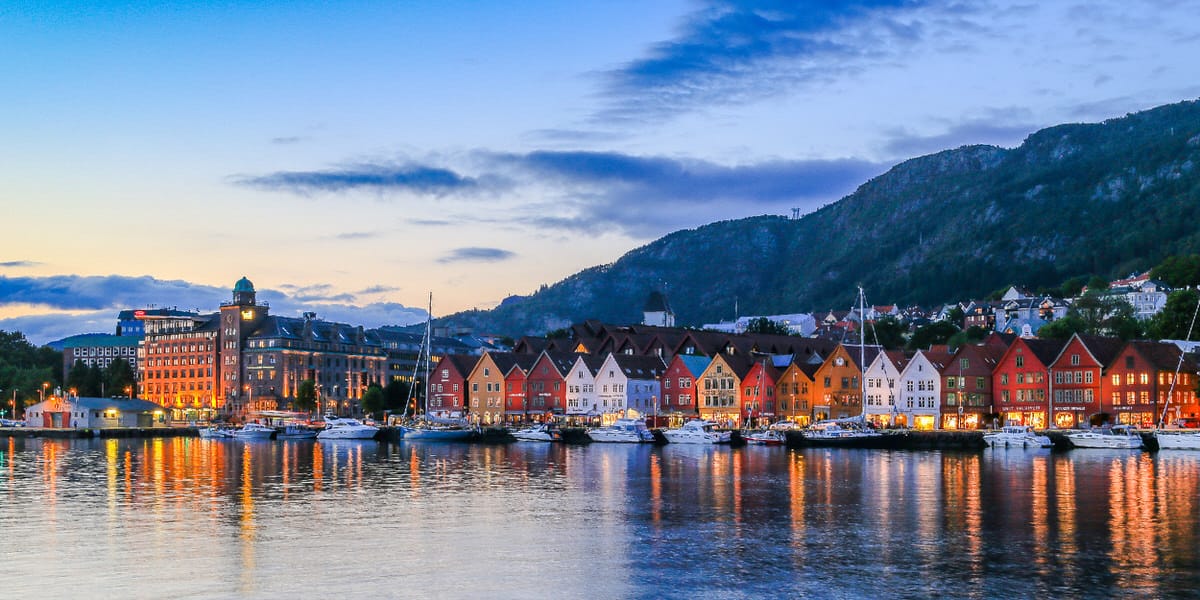 Before my first trip to Bergen I knew that the wooden houses painted in bright colors along the Bryggen are part of Unesco World Heritage List. It’s easy to understand why they are among the most photographed attractions in the world.

What I didn’t know is that Bjørgvin, the ancient name of the city, means “the meadow among the mountains”, or something along those lines. According to the legend, the romantic nickname was forged in 1070 by king Olav Kyrre, who founded the city nestled between the fjord and the mountain. After 200 years, another king commissioned the building of Håkonshallen, the royal palace. At that time, Bergen was the capital of Norway and one of the most important trading centers of the Hanseatic League.

Now Bergen covers an area of about 180 square miles: too big for just one day. Yet, a few hours will allow anyone willing to walk to get to know Europe’s rainiest city.

I decide to see the Bryggen immediately after landing at Flesland airport. I walk along the docks, and get to the center of the Hanseatic League: narrow streets, wooden sidewalks, tall buildings that once were used as warehouses. The wood creaking under my steps, the rain hammering on the roofs make me go back to the past, among wood planks smelling of moist and moss, among ancient workshops and small inns with rickety floorboards.

From here, I walk towards Håkonshallen, the fortress were the royal family used to live. Rosenkrantztarnet, the tower where king Eirik Magnusson lived until his death in 1299, stands close-by. When the king passed away, the tower was used a prison until 1800. It’s worth climbing to the top and get a good view of the city before going to the Fisketorget on the main harbor. The fish market is the historical meeting point for fishermen, fishmongers, merchants and cooks. From one of the stalls I buy my first fiskeboller: they look like meatballs but are made with cod, rolled in breadcrumbs and deep-fried.

A short walk takes me to the Fløibanen, the cable railway station. It’s probably one of the best-known landmarks in Bergen and even if there’s a queue for the tickets, the view from the top is worth the wait. The tiny cable car climbs quickly: in under ten minutes it gets to the top of Mount Fløyen. The city looks smaller from high up, and I have the impression that it’s sandwiched between the narrow, deep fjord and the steep mountains range that surrounds Bergen.

It’s cold and rainy so I walk into the small café to warm up: I can’t resist a hot cup of coffee and a kanelboller, a kind of pastry similar to a cinnamon bun. I don’t have enough time today but if I had, I would go back to the Folkerestaurant, where they serve Bergens fiskesuppe, the fish soup that is made with a secret ingredient which apparently is known only in Bergen.

I could go back to the city by cable car, but I rather walk the couple of miles that take me to Bergen via paths and narrow streets that go deep into the woods.

3 – From the National Theater to Festplassen

Another route to get to know Bergen takes me to the Nationale Scene, the oldest theater of the country. It dates back to 1850, when violinist and composer Ole Bull fostered its creation. Since the time when Ibsen staged The Pillars of Society, the theater has undergone many changes and refurbishments, especially after the collapse of one of the wings during World War II.

From the theater square I stroll towards Torgallmenningen, the high street. It stretches from Olav V Plass to Strandgaten and is the meeting point of the citizens, young and old, especially during the warmest months. The wide and austere street is lined with hotels, shopping malls and cafés. I walk past the Bergens Tidende newspaper headquarters and reach the Festplassen, the square where each year people gather to celebrate May 17th, Norway’s National Day.

A short detour take me beyond the railways station: I walk east, towards the harbor, until I reach the Marken neighborhood with its cobbled streets and lanes going up and down, its small houses painted in pastel colors, its small workshops and independent cafés.

I stop to take a look at the Pinsekirken, a Pentecostal church painted white and sporting a pointed roof; my next stop is Galleri Bokboden, an art gallery managed independently by a group of students from the Bergen Academy of Art and Design.

This neighborhood is the perfect spot for a quiet, relaxing stroll and for a cup of coffee in one of the small cafeterias.

Norwegian musician and composer Edvard Grieg lived most of his life in Troldhaugen, on the outskirts of Bergen. His home is now a museum that can be reached with the Light Rail from the city center to Hop: from here, a short walk takes me to the shores of Lake Nordaas and to the house where the musician spent years with his wife.

Unlike other musicians, Grieg was lucky enough to reach national and international fame when he was still alive. When he wasn’t traveling to Paris, London, Berlin or Prague, he liked to spend the summer months in his house on the lake.

Today Troldhaugen is a museum where people can walk from one room to the next, enter the cabin where Grieg used to work,  sit in Troldsalen concert hall and see the  grave where Grieg’s and his wife’s ashes are buried. There’s a permanent exhibition and a small café.

Bergen is the starting point of a trip to Norway: from here, it is possible to board the Hurtigruten, the former post ship that navigates through the fjords; or the Flåmsbana trains that run on a railway line among the steepest of Europe.

2 thoughts on “How to Spend a Day in Bergen, Norway: 5 Things to Do”