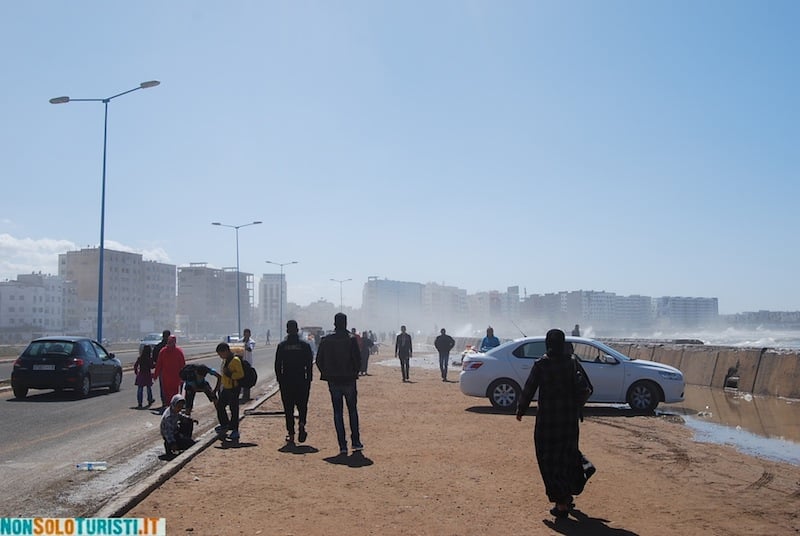 ‘Flavio, listen to me: if you are going to follow my advice you won’t have any surprises.’
‘But I like surprises.’
‘I mean you are not going to be cheated.’
‘If you are able to avoid me being cheated, you are not just a genius… you are a wizar.’
‘First of all, do never loan your money to anyone.’
‘Er… I think it’s too late for that. The other day…’
‘You will never get it back, your money is lost.”
‘I know.’
‘And be careful with women: here they are far more sharp than men. Get laid if you want, but don’t fall in love.’
‘I’m afraid it’s too late even for that.’
‘Never mind…’

I didn’t plan any encounter today. I just wanted to have a short walk in Casablanca city centre and roam among the shops, find a birthday gift for my girlfriend and get back home after lunch.

After a tuna sandwich and am avocado juice, I took a break on a bench close to Place Mohammed V, in the bustling heart of this Moroccan town.

Michele seated beside me after greeting me in perfect French. I understood he is Italian only after hearing him on the phone, another scattered soul looking for a new existence far from our native land. When he distractedly hinted to the nice sunny day, I didn’t resist and answered in Italian.

‘Oh… a fellow Italian. You just arrived? If you need any help…’

Born in 1947, Michele knows Morocco better then the Moroccan themselves. He is the perfect expression of Italian affability, he knows everyone and helps everyone. He speaks French and is also fluent in the local Arab dialect. He travelled all over the world and ended up in Casablanca, emblem of a country in precarious balance between modernity and islamic tradition.

‘Whenever I have time I come here to see my cousin…’

His cousin is Luciano Tadiotto, the Italian technician who died in the 2003 terrorist attack which claimed also forty more lives. It was the first time that international terrorism hit Morocco, after the slaughters in Saudi Arabia and Chechnya. Five bombs placed in Western and Jewish sites, five blows against a peaceful and welcoming people who lived in relatively serenity since independence, worried about not displeasing the monarch-dictator more then about whatever happened in the rest of the arab world.

Five bombs and no claims: another shock to the system fated to be reread by the media according to the trend of the moment, just to highlight whenever it is needed that there are the good guys on one side and the bad guys on the other.

‘Michele, how did you end up in Morocco?’

‘I am geologist, the most wonderful profession in the world. I used to leave every time with my bag,  the tend and my pickaxe. I searched for minerals all over the world, to sell the extraction rights to the local companies. Here I found hospitality and good weather, even if in the last twenty years the situation got a lot worse, especially in Casablanca. It’s our fault too, we messed them up a lot.’

I listen to him, thinking of the people I met so far, in Casablanca and Rabat, their kind smiles and their helpfulness. But I know Michele is right, and Casablanca is the perfect example of the uncertain pace of Morocco towards modernity.

Casablanca is Morocco’s largest town and also the most dangerous one. Since years there are rumours about a criminal organization known as Tcharmil No Caramel, but from the confused news on the mostly useless local newspapers it’s hard to understand if it’s really a well organized gang, responsible for most of the crime in town, or just the product of diffused paranoia.

When the king is in town – they say his wife, princess Lalla Salma, loves doing shopping here and eating in the luxurious local restaurants – security measures are tightened and the police spreads all over the place. In those days the wrongdoers think it twice before doing anything funny. Still, wondering around at night alone doesn’t come as a very bright idea.

But Casablanca is also a lively and friendly town, filled with well educated youth eager to party in the clubs and enjoy the sunny days on the beach. There is hope, and opportunity. Not a dream destination for a short holiday, but an interesting place to explore the complex sides of Moroccan society.

In the meanwhile Michele is busy with his chai. He pours it from the pot into the glass, and then again in the pot until he is sure he stirred it well. Then he takes just a sip and adds two spoons of sugar. Now it’s ready, a perfect Moroccan tea.

Then he looks at me. I drank my tea alredy, without stirring it nor adding sugar.

1 thought on “Changes, Hopes and Fears – An Unexpected Encounter in Casablanca”

A reel from our time in London seems appropriate on this day. RIP Queen Elizabeth ll
Window From the National Maritime Museum in Greenwich, London
A walk in Carnaby Street,London
Carnaby Street, London..
Hamstead Heath, London - Summer day
Night at the museum in London