Vietnam is a country with many controversial issues, a country rich in history, culture and traditions, but still developing. A country with third world villages and exclusive resorts.

Hanoi, Vietnam’s capital city, portrays a unique mixture of western and eastern features, of past and present. The town developed mostly around the Green Lake (Hoàn Kiếm), also known as the ‘retrieved sword lake’.

As the legend goes, emperor Lê Lợi (who lived among the XIV and XV century, founded the Lê dynasty and as a victorious commander achieved Vietnam’s independence from China in 1427) owed his ability and bravery to a divine help, specifically a sword given to him by the god Kim Qui (‘golden turtle’). One day, while the ruler was sailing on the said lake, a turtle came to him to claim the sword and Lê Lợi gave it back. To commemorate this encounter the lake was renamed after the sword and the holy turtle is still resting in a small temple in the middle of the lake.

Huge turtles inhabit nowadays the lake, a very long living species which is threatened by extinction. It is said that they only show themselves to the visitors on special occasions and if someone is able to spot them it’s a sign of immense luck.

Around the lake there are Hanoi’s major quarters: the Old Quarter and the French Quarter. The first one still preserves the original road pattern and architectures.

At the beginning of XX century Hanoi was made of just 36 streets, most of them are in the Old Quarter. At that time every road hosted a specific branch of activities, like silk shops and jewelries, and the modern names still reflect their old tradition. The most popular one is the Silver Road.

The French Quarter was developed under the French rule, which imposed its own style over the town and you can still notice it when you look at the boulevards surrounded by trees, the Opera, the General Bank of Vietnam, the Presidential Palace, Saint Joseph Cathedral and the historic Hotel Metropole (where Charlie Chaplin was supposedly lodged during his honey moon).

On our first day in town we joined a guided tour with HanoiKids, which offers free tours held by university students who are able this way to improve their English. On the other hand, the tourists pay for lunch, museum tickets and transportation.

We made our first stop under a pouring rain at the Ethnological Museum. Here visitors can have a look at Vietnam’s culture and society, through marvellous representations of daily life and special events. In the outer part of the museum there are several traditional buildings from the country’s many provinces. It’s really fun to explore them… but it was little bit less amusing to do so under the rain!

Thereafter we went to the Temple of Literature, built in 1070 by emperor Ly Thanh Tong who dedicated it to Confucio in a way to homage all scholars and literates. In 1076 it became the headquarter of Vietnam’s first university, where the mandarins’ children attended their education, and it kept its role until 1802, when emperor Gia Long decided to move the National University to Hué, his new capital.

The temple had to be a relaxing and meditative place. Unfortunately, beside the rain we had to face also a crowd of tourists and freshly graduated students, who along tradition go to the temple to have pictures taken of themselves. 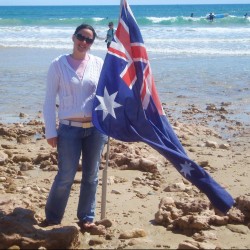 Milan wasn't big enough, so to satisfy my wonderlust I started to look for new horizons. After one year in the USA and six months in France, I moved to Australia for both love and career. I left my town with a one way ticket and a lot of hope.