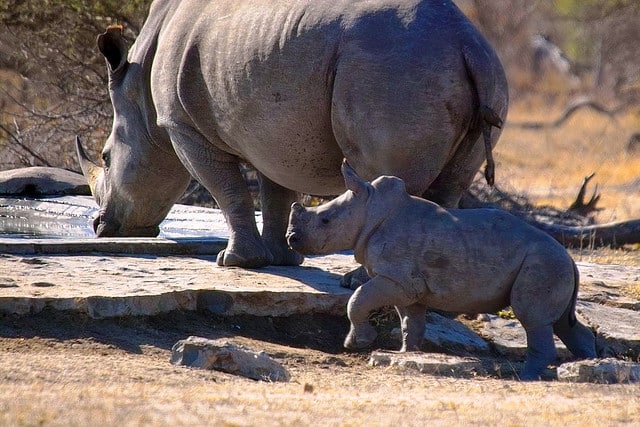 Warren and Jamin are two South African friends of mine, two wonderful oddballs who welcomed me in their circles during my stay in Cape Town. Most of times you can hardly tell what they are planning, and in any case you will never foresee how it ends.

‘We were born with the African dust on our feet and have a real love of all things wild – that means nature, people and places…’

These guys are irrepressible, and they have a heart of gold. So when they told me they wanted to join a banger rally to protect the African rhinos, I had to learn more about it.

In 1970 there were about 160.000 rhinos in Africa. Today the score is down to 10.000, mostly white rhinos, while the black rhino almost disappeared already, The main reason for such an abrupt fall is game hunting: in the past, rhinos were a most yearned prize for tourists joining safari hunts; now poachers hunt them down for their precious horn.

South Africa is the only African country which adopted strict rules against rhino poaching, but laws didn’t discourage poachers. Rhino horns are highly valued, they are used in Arab countries for dagger handles and are a recurrent ingredient in Asian traditional medicine systems. In 2008 there were 83 recorded poaching cases. Every year it got worse: in 2012 the record hit 668, and for 2013 there were already 860 cases. Poached animals may soon exceed births, which would lead to a serious threat to Rhinos very survival.

Here is why Warren and Jamin choose to join a banger rally and raise awareness and funds intended for RAGE (Rhino Action Group Effort), an organisation strongly committed in the fight against the illegal rhino poaching scourge.

Banger rallies were brought to life in 2002 by ‘crap car svengali’ Julian Nowill, whose profession – as he tells himself on his site – ‘is simply a cover for his politics of hard line Marxism and a love for all things Soviet’.

‘The World is becoming a dull and safe place ruled by Health and Safety Nazis and this applies to travel, too. However if you have a pile of excrement on your drive which needs scrapping and the local car scrapdump does not fill you with excitement, then buy some cable ties and gaffer tape, and some cases of Vodka and Pot Noodle and jump in and go South or North or somewhere.’

Every year Julian and his wife Annette organize banger rallies in Morocco, Russia and Jordan. Among these is the Dakhla Challenge. Next race’s contenders will leave on April 11, 2014, from England and reach the Moroccan-Mauritanian border after 4228 kilometres. Here they will sell the car and give the income to a charity of their own choice. And there is just one rule: every car has not to be worth more than 300 euros.

‘The last person to the finishing line is probably the winner, ’cause the first person is a bit of an asshole who pumps to be ahead of every body else…’

Warren and Jamin properly named their team Fried Not Poached. As said before, the money raised from selling the car will go to RAGE, but that’s not all: any supporter can pledge money per kilometre completed or invest in sponsorships in support of the charity.

And during the race, of course, my friends will try to get as much fun as possible, camping in the desert and crossing four countries in a couple of weeks, driving the worst-off car they managed to find.

Window From the National Maritime Museum in Greenwich, London
A walk in Carnaby Street,London
Carnaby Street, London..
Hamstead Heath, London - Summer day
Night at the museum in London
Hyde Park and Kensington Palace in a very hot day in London