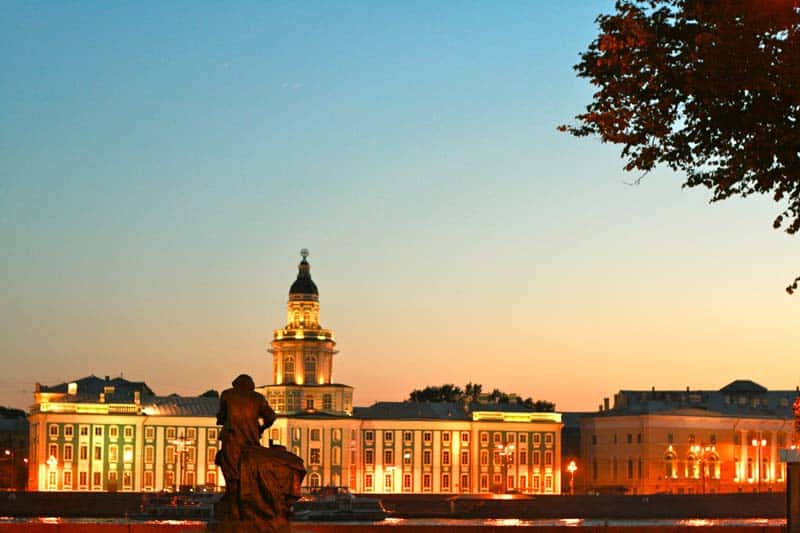 Close your eyes and imagine the charm of Paris, the elegance of Turin, the beauty of Venice and the appeal of Moscow. Put them al together in the same picture, add some crepuscolar light and a bit of poetry, and you will have an imaginary journey to Saint Petersburg during its white nights.

Saint Petersburg is a wonderful destination in any time of the year, but during the summer solstice this town reaches its utmost splendour. The spectacular frame of stylish buildings, churches, squares, canals and streets would be enough to leave any visitor speechless. But during the famous white nights it shines magically, offering to any traveller the charming sensation of being in a striking space, where night and day are mixed together in a tender embrace.

It isn’t surprising I was beguiled by Saint Petersburg’s magnificence. I knew I would see a jewel of architectures, but I couldn’t imagine the emotion of experiencing Saint Petersburg in the longest day of the year.

Saint Petersburg’s white nights are due to the town’s geographical position and happen every year between May and July. The same phenomenon is known also in other places, but never as impressive as in Saint Petersburg. The colours painting the sky create a magic and unreal atmosphere, where routine is replaced by the extraordinary, bewitching the visitor forever.

Expat for love, I bounced from Milan to Malesia, from Singapur to London, in just four years. Now I live in Moscow with Ale and our two children: Pippy and Piggy.