Day 2 of our adventures in the Sierra Nevada del Cocuy

After staying the night at Cabanas del Pulpito, we were keen to do the trek to Laguna Grande. However we were just debating whether our tired legs could carry us there, the 8 hours of walking the previous day had tired us out.  In the end our host Marline suggested the perfect solution, she offered us a couple of ponies to ride to Laguna Grande. The small matter that Marco had not sat on horse before wasn’t going to stop us!

While Marline organised the ponies we started walking down the road to Hacienda Esperanza where we would be starting the trail.  “El lechero” – the Milk truck passed by and was heading in our direction so we jumped on for a lift. It seemed the lechero was the local bus and grocer all in one. Every day he collects the milk from houses and farms in the area. By the amount of times we stopped it seemed as though nearly every house had an urn sitting at their gate waiting to be collected. The lechero told us in total they collect a staggering 1000 lt per day. Sitting on milk urns with bags of potatoes surrounding us, it seemed like we had gone back in time.

Once at Esperanza we met Luis Carlos and his son Luis Carlos secondo who were from Bogota and had also hired ponies from Marline, so we would be making the trip to Laguna Grande together. While we waited for the ponies and guide to arrive we spoke with Guillermo whose family owned Hacienda Esperanza, a working farm and accommodation for trekkers. Guillermo explained that during the 90’s for a period of about 10 years, the fighting guerrillas gangs would come to the area in their truckloads maybe 300 – 500 men. With force they would take over farms and houses, having no respect for people’s property just taking what they wanted; crops, milk and livestock. During this period Guillermo’s family had to abandon Esperanza: it was just too dangerous to live in the area.

The ponies arrived with our guide Miguel and in no time at all he had us all mounted and on our way, we had also managed acquire an additional member to the group a little white dog who was bringing up the rear.  With our speedy start Marco didn’t have much time to be apprehensive. I shouted a few pointers like, “sit up, keep your shoulders back and hold tight.” I was thinking to myself what’s the worst that could happen? Probably falling off but he wouldn’t have far to fall as the ponies were so small, which was reassuring in someway. The first part of the trail took us through green pastures separated by stacked stonewalls and full of sheep. Then we moved through a boggy plateau with a vast granite wall on our right and snow capped peaks stretching out over the horizon. With the ponies doing all the work we were able to just take in the amazing scenery. After the plateau the ponies expertly negotiated the very steep rocky trails. I was impressed by their sure footedness: they were as agile as mountain goats not once falling or tripping. It was best to keep a loose rein and let them find their own route.

After three and half hours we finally reached Laguna Grande just beyond the lake we were also treated to breath taking views of Pulpito Diablo and Pan de Azucar from other side and three other snow capped peaks.  Once again we were the only people on the trail and had this spectacular wilderness to ourselves. We secured the horses to some boulders and walked another hour to reach our final destination; the foot of glacier that feeds Laguna Grande and the small lakes below it. The little white dog who had followed us all the way was the first to reach the snow line and was rolling and barking excitedly as he waited for us to arrive. This was the highlight of the trip for Luis- Carlos Secondo who hadn’t seen snow before. We lingered at the glacier for half an hour of so taking in the magnificent ice wall that sat on the far side of Laguna Grande. Like the day before the weather began to change quickly the temperature cooling and thick clouds started to move in around us. The ride home was fast and furious, the ponies some how sensing the quicker they got back home the better. The steepness of the rocky trail seemed more apparent now than on the way up. I was shouting at Marco to lean back, concerned he might lose his balance and fall off. To my amazement he handled steep paths expertly, like a true horseman holding the front of the saddle with the other arm out stretched for balance. We made it back to Finca Esperanza in 3hrs.  We all dismounted from the ponies and although Marco couldn’t call himself a true cowboy yet, he did have the famous cowboy walk from seven and half hours in the saddle! While we were waiting for our lift back to Cocuy town we were chatting with Guillermo again who explained that he was now running Hacienda Esperanza for his family. He had originally trained at Chef School in Bogota and up until recently and had been working in a high-class sushi restaurant. But he had given it all up to come and run Esperanza and after spending two days in El Cocuy I can completely understand his decision: there is something very special about this secret wilderness. 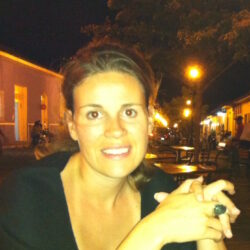